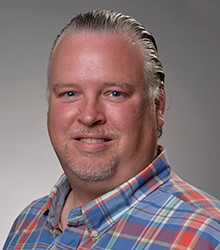 Dr. Jeffrey Fouche-Camargo (Jeff) is an assistant professor of nursing at Georgia Gwinnett College in Lawrenceville, Ga.  He has been a perinatal nurse since 1994.  After 16 years at a large regional medical center, he transitioned to academia.  He incorporates AWHONN resources into both didactic and clinical learning.

His journey with AWHONN began as a student. Jeff worked as a patient care tech and the charge nurse was a huge advocate for AWHONN, which was still NAACOG at the time.  After graduating from nursing school, he joined AWHONN.  A wonderful mentor in the metro-Atlanta area who was instrumental in keeping the area up-to-date on evidence-based practice and professionalism inspired his love for education.

Jeff is a designated AWHONN fetal monitoring instructor for both the intermediate and advanced courses.  He truly believes that being an AWHONN FHM instructor was an excellent way to get involved with AWHONN.  “Not only do you receive the most current evidence about FHM, but also you are able to share this knowledge with class participants.” says Jeff. “Disseminating evidence is one of the most important functions of AWHONN and a major professional responsibility. Using AWHONN resources to educate nurses, to me, is the most important thing I do as an AWHONN member.”

His role in AWHONN took off when he was selected to be a part of the 2011 Emerging Leaders. “When I became an Emerging Leader, my door to being a more involved AWHONN member was opened wide.” says Jeff. “Being an Emerging Leader exposed me to all of the wonderful things AWHONN does and allowed me to become an active member. It propelled me into several leadership positions with AWHONN, and I am very grateful for the program and the mentoring that came with it.”

For fun, he enjoys hiking to waterfalls and traveling, and has a goal of visiting all seven continents.